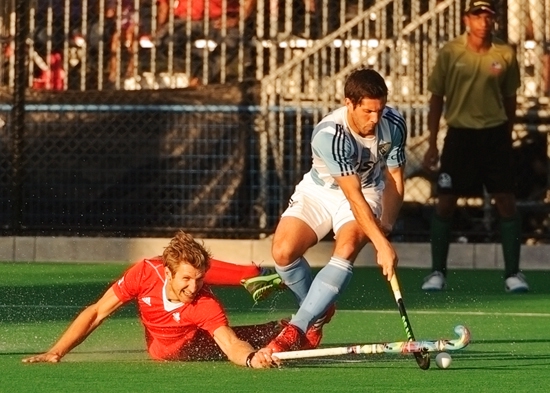 Canada are the current holder of the Pan American Cup after beating the USA four years ago in Chile (2-1 after over-time). Argentina and Canada have met in the finals of all Pan American Games since 1975 (6 wins for Argentina and 4 for Canada) but only once before in the history of Pan American Cups finals (with Argentina winning in 2004 in London, Ontario, a few kilometres west of Brampton).

A Canadian win would earn them a berth at the 2014 World Cup. However, a win for Argentina (who have already qualified for the World Cup thanks to a 2nd place finish at the World League Semi Final in Malaysia) would not push Canada through as continental runner-up, so the Canadians had their work clearly cut out.

The two teams started nervously, with the Canadian defenders mishandling a few balls and Lucas Rey missing a virtually open net in the opening minute of play. The first serious chance was for Canada when Matthew Sarmento forced a penalty-corner on a powerful circle entry after sprinting 50 meters to save the ball from the back-line. The Canadians chose a fancy option but it did not work and play settled in midfield for a short while.

Argentina had most of ball possession but the Canadians were closing very quickly on them. Matias Paredes nevertheless managed to enter the circle to challenge Dave Carter, but the Canadian keeper stood tall in front of him to deny the attempt. The Canadian defense was overwhelmed by a few swift Argentinean moves and free hits played quickly, and Argentina forced a series of penalty-corners, but Dave Carter saved brilliantly two of them and two other went wide.

The Canadians were only dangerous on sporadic counter-attacks, and the match was slowly turning into a classic encounter between the continental arch-rivals, with Argentina dominating the proceedings and Canada frustrating them again and again.

Argentina thought that they had scored in the 28th minute on yet another penalty-corner but the goal was denied, and the Canadians were still very much alive, with even a handful of good chances in the final minutes of the period, finally forcing Juan Vivaldi to show his talent in the Argentinean goal.

Argentina were promptly on the scoreboard at the beginning of second period, on a penalty-corner by Gonzalo Peillat. The same Peillat powered another penalty-corner 3 minutes later, and the Canadians were suddenly facing a steep slope to go back in the game.

Gonzalo Peillat completed his hat-trick of penalty-corners in the 48th minute, putting the match virtually out of reach of the Canadian squad. They nevertheless kept pushing, encouraged by the local crowd, but could never really challenge dangerously Juan Vivaldi. The Canadian defenders were getting tired, conceding a number of penalty-corners, and Gonzalo Peillat tallied his fourth goal of the Final in the 57th minute.

Argentina controlled the end of the match en route to a 4-0 win against home team Canada, to wrestle back the Pan American Cup from the hands of the 2009 winners. They were soon celebrating at the centre of the pitch, while the Canadian players were dejected, their World Cup dreams evaporated.