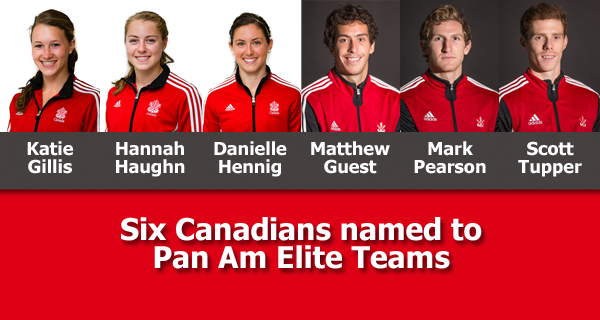 Scott Tupper was named to the Men’s Pan American Elite Team – his third nomination to the all-star squad. Joining Scott are Matthew Guest and Mark Pearson, each first-time nominees.

Kate Gillis, Hannah Haughn and Danielle Hennig were named to the Women’s Pan American Elite Team – each for the first time.

“This is fantastic recognition for Scott, Mark and Matt and underlines all the hard work and preparation that goes into playing at a consistently high level throughout a major tournament,” said Anthony Farry, head coach, men’s national team. “All three have demonstrated a high level of leadership within the program, each in a different capacity.”

“This kind of acknowledgment for our hard-working players is both symbolic and positive reinforcement for the teams and their own progress throughout the year,” said Ian Rutledge, head coach, women’s national team. “I am delighted in the three players chosen; they had great tournaments for us and have also been three of our most consistent performers in 2013. Like many on our team, they embody the values, work ethic and commitment required for international success.”

Working in collaboration with a variety of partners, Field Hockey Canada is the national sport governing body responsible for the development, growth and promotion of field hockey in Canada. Through the Women’s and Men’s National programs, Field Hockey Canada selects, prepares and promotes Canada’s teams for international competitions including Continental Championships, World Championships, and major multi-sport games such as the Olympic Games, Pan American Games and Commonwealth Games. Approximately 15,000 Canadians participate in field hockey, which is currently played in more than 600 schools and 400 clubs across the country. For more information, please visit fieldhockey.ca.