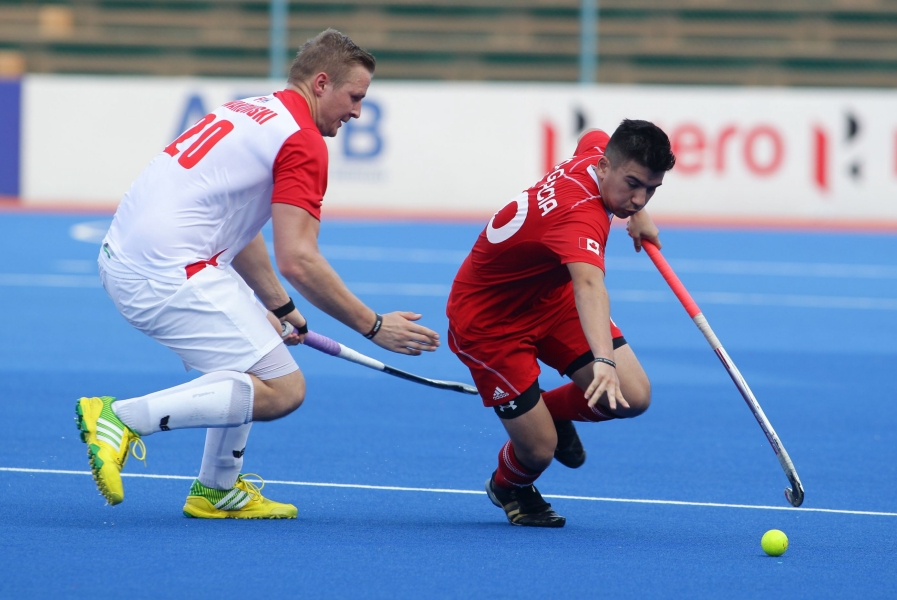 Congratulations to Mark Pearson and team Canada for knocking off Poland in the quarter finals. Canada now moves on to semis with Malaysia again.

Canada got the better of Poland in the second quarter-final of the Pahang Champions Challenge 1 in Kuantan. In Saturday’s semi-final, the Canadians will now face host nation Malaysia, who had earlier beaten pre-tournament favourites New Zealand 3-2 in a shootout.

“We are really excited about playing Malaysia again. We know the opposition very well and of course we will try everything to win this time”, said Canada’s Philip Wright. His goal (60’) was the difference in today’s quarter-final against Poland as he dived onto the ball to deflect a penalty corner shot into the Polish goal to give Canada a 3-2 lead. “This is a really strong win for us. It was a really difficult match, so all the credit to Poland”, added Wright who was selected as Man of the Match.

The second quarter-final saw two equal teams battling it out for a semi-final spot. However, both teams failed to create any scoring opportunities in the first quarter. Poland opened the scoring in the second quarter when Karol Majchrzak (22’) managed to convert a rebounded penalty corner. The goal acted as a wake-up call for Canada and they subsequently increased the speed of the game. Iain Smythe (29’) equalised from open play just before half-time.

Michal Nowakowski (43’) came close to scoring for Poland but his penalty corner flick was saved by Canada goalkeeper David Carter. However, Poland took the lead again when Krystian Makowski’s (47’) penalty corner shot found the net. Canada struck back thanks to Matthew Guest (54’) before Wright (60’) provided the winning goal.

In a dramatic finish to an exciting match, Canada’s Sukhi Panesar and Poland’s Michal Kasprzyk were sent off with red cards in the 69th minute because of the use of excessive physical force.